As part of our school pyramid, the children in Years 4 to 6 participate in a competitive football league throughout the year. There are also opportunities for children of different football abilities to take part in development matches within the pyramid. Our aim is to ensure children understand that matches are competitive but they are also learning opportunities and a great chance to develop our 'ready for the future' vision through sport. The children in the football team are set collective and individual challenges throughout matches to ensure that they not only develop their football skills, but their holistic skills of how to be a 'sportsperson' and show sportsmanship.

The Year 5 and 6 football team had their first league game of the season against Sandal Magna Primary School. We had lots of new faces in our team for this fixture and the children showed great excitement to be part of the team and to be playing a competitive match against another school.

Throughout the game, the children were set challenges to understand that it is not just about winning but developing their team work, communication and also their individual skills. The children's attitude during the game was excellent and they showed resilience when they couldn't play their normal style of football. All the children involved were given equal playing time and also played a range of positions which were unfamiliar to them to build their understanding of positioning and also added an extra test to their abilities.

St James won this match 8-0, but what was more pleasing was to see the children challenge themselves and create discussions of how they need to play, what is going well and what they need to improve upon. On Thursday, 15th November we had our second league fixture against Sandal Magna. This was a great opportunity for the children who've attended the weekly football club to represent the school. For some of the children, it was the first time they have represented the school in a fixture and their delight was evident throughout the game.

At the start of the game, there was a dilemma. Sandal Magna had 7 children at the last minute. When discussing what to do, one of our children offered to represent Sandal Magna so that the teams are even. Once this was mentioned, some of the St James children said they'd happily play for both St James and Sandal Magna to ensure the fixture could still commence. Some of the children agreed that every 5 minutes, they will take turns representing both schools.

Whilst representing Sandal Magna, these children shared the same passion and tenacity during the game and worked brilliantly with children they've only just met. This act by the children is what school football is about. St James did win the fixture 4-0, but both schools and parents agreed that the attitude of the St James children was the highlight of the game.

I can't thank the parents enough for supporting their children in allowing them to make this decision. I would also like to say thank you to Durkar Devils for allowing us to use their facilities for this fixture and also Faye Geary for helping set up the pitches.

These are the football results for the Football League this season. Unfortunately 4 games have had to be postponed due to busy schedules for both schools in the summer term. We have been proud to introduce Year 4s into the football team to play alongside the Year 5 and 6 children. These children have settled into the team and relished the opportunity to represent the school. They'll continue to represent the school as they move into Year 5 and support the next group of Year 4s to join the football team.

Children's development is the aim of our football at St James. We are using our vision as a platform for our participation in games. The children are encouraged to take a risk, to play as a team and to support each other through their development. The children will make mistakes against other schools and this is what helps them learn for the future when they are in the same situation. It has been great that the children have bought into what we want to achieve as a school team. 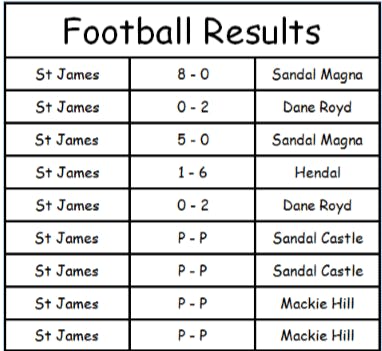